The Community of Christ Temple and the Fibonacci Sequence 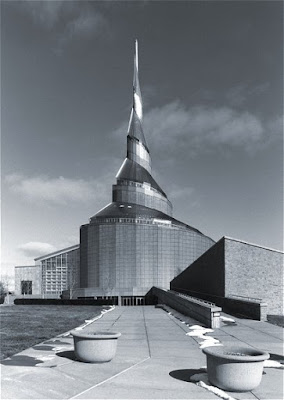 I mentioned in an earlier post that I thought the Community of Christ Temple in Independence was fashioned after the Fibonacci sequence after looking at the Temple from above on Google Earth, and finally, have proof of that in an article in the Independence Examiner.

"Outside, from the top of the spire to the building floor is 300 feet. At the time it was constructed, the Temple had the third-largest stainless steel roof in the country (80,000 square feet) and marked the first structure to represent the mathematical Fibonacci sequence – the infinite integer in which the first two terms are 1 and each succeeding term is the sum of the previous two."

Take a look at the temple from Google Earth and you'll see that the spiral shape does not end with the building itself, but extends further out through the parking lots and grounds.


The significance of this is that the Temple shape creates a spiral vortex of energy. A test with dowsing rods by a group of 12 people confirmed this in 2018. By walking towards the structure from a parking lot across the street, each person had their rods cross in front of them, then open again approximately every 15 feet, which indicates spiral energy that is very strong.

The Fibonacci Sequence is at work to align our bodies with nature and increase our spiritual awareness.

Spiral vortexes are similar to ley lines but stronger. They create energy which makes it easy for inter-dimensional beings to pass into and out of our dimension. This is the likely explanation for all of the reports of strange phenomena in the 1/2 mile area around this temple.

A portal is a doorway in the physical world that allows free access to and from the spirit world. The existence of a portal relies on a vortex of energy to sustain it. This is an area of mass-energy in a high concentration that manifests a spiral of energy which can be positive or negative in nature.

Vortexes can be made stronger at points where Ley Lines cross. There are two major ley lines going through this location.

It makes one ponder - Did Joseph Smith choose this location for the return of Jesus for a reason? Was he aware of the ley line energy?

Upflow and Downflow Vortexes: This is where the energy is flowing upward out of the earth, these vortexes are generally revitalizing and feel positive. The energy here feels more electric than magnetic and is said to boost spiritual skills, to stretch and expand the consciousness. Downflow Vortexes are negative in nature and feel heavy and dark. I believe that this is both a positive and negative vortex, due to the energized feeling that people get when visiting the location, and the seemingly negative entities that have been observed.
Quest Investigation Group and MUFON have received multiple reports of balls of light, UFOs, extraterrestrials looking in windows, small monkey-like creatures, shadow people, and quite a few haunted houses in the area. The hauntings may be more than just normal spirits, but other types of inter-dimensional beings using this vortex. I have personally investigated at least 20 buildings and houses around the square that have haunted activity.
One man awoke in the middle of the night to see a Gray alien looking into his bedroom window. The man said "I was so scared that I just froze in place with my eyes locked on what looked like an alien with no hair and big eyes. I don't know if it knew that I could see him, but he was looking right at me. Then, he just turned and walked away."

Another man was sitting on his front porch one evening around midnight when he saw three dark creatures that looked similar to monkeys go into a storm drain. He put his house up for sale soon after. "I know what I saw. Those things were just too creepy, and I never want to see them again," he said.

So both negative and positive entities and energies can move through this particular vortex. I prefer to focus on the positive, and visit the area during the day to draw in energy and get supercharged. This helps with psychic work and remote viewing work and it makes one feel more energetic. I'd say this is a better choice than an energy drink.