I got very dizzy and slightly nauseous this morning and saw the air shaking again.  I found out later that there was an earthquake in Mexico City today but did not see what time this occurred. The dizziness and shaking air are now gone. After experiencing this many times I am now completely convinced that the electro-magnetic field of the Earth is affected all over by earthquakes, and that this may be the reason why dogs get lost a few days prior to the events in the area of the epicenter.

We need to do more research on this - perhaps some humans are more sensitive to changes in the electro-magnetic field and are picking up the same things that dogs do, which affects our sense of balance.

I sense that things are heating up and that we will be experiencing more frequent Earth changes in 2012.  As I write this, the dizziness has returned, so we'll see if another high-magnitude quake happens soon.
at June 08, 2012 1 comment:

Messages from Ancient Native Americans about our Future

I recently experienced something that I used to be very skeptical about. I wasn't convinced that people could channel another entity through them and allow the entity to speak. But that is exactly what happened to me just a few weeks ago while meeting with some other “Star People” who have had encounters with Extraterrestrials and who are psychic, as I am. There were three Native Americans present and we had just spent the entire day together. I was doing body scan readings for the group when an entity asked if he could speak through me. I did not sense any harm in doing so and asked the others in the room if they minded. They did not, so I said yes to this unknown being.


He said his last incarnation on this planet was 50,000 years ago and that he wanted to give a message to the people. (A few days later he told me his name was “El.” Then an unknown language came forth and spoke through me using my voice. I had no idea what, if anything, it said or what it meant. During this I saw a vision of large yellow arrows pointing towards the center of the state of Missouri from the Missouri river to the north and the Mississippi river to the east.


Judy White Wolf taped the session and said afterward that she thought the language might be Blackfoot. I have no connection to Native American tribes and do not know any of the languages. However, I did have a recollection of an event during a hypnotic regression session a couple of years ago which involved me being a medicine woman and being taught by a shaman, then taken aboard a craft with a Mantis type being.


Next, Judy took the tape to her Chief and to another Chief to see if they could possibly translate it. The translations were only partial, but included the following:


“At the time of the great shaking it will be where the two angry rivers meet”
and
“The great cataclysm will occur at the lower Missouri and upper Mississippi.” 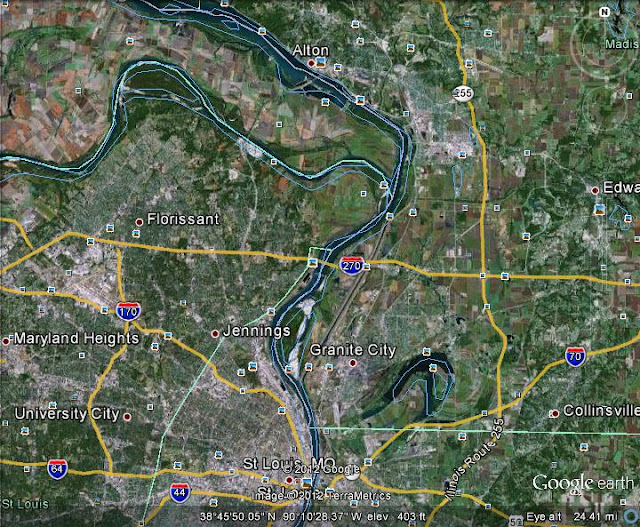 Google Earth map where the Missouri and Mississippi Meet north of St. Louis


After this session I had two vision dreams:

2-2-2012
I was sitting in a circle participating in a ceremony outside with a large fire in the center. There were trees nearby. There were others standing in the circle but I knew only a few which included Jamie in his bear skin and Judy White Wolf, and another woman I have not yet met. Suddenly a woman came out of the top of my head and rushed towards the fire – she was surrounded by surreal looking pink and blue flames that were swirling around her in lines which are difficult to explain. As she exited my head she had dark long hair at first, then it changed to white hair as she entered the flames of the fire. She wore a white robe. Only a few of us could see her and looked up as she floated above the real flames which were yellow in color. We looked at her but the rest of the people did not. One of the group (a woman with white hair) said “It is White Buffalo Woman”, but I believe that we are all looking with our third eye – and I cannot honestly say that it was really me that this woman came out of, because when I do remote viewing I sometimes enter the body of someone else and see through their eyes. Next, my consciousness went into this woman and I could now look down on all the people from above and turn in a complete circle Then I (she) said “Now is the time for the people to go to the place of our ancestors and await the return of our Star People ancestors.” I then saw a line going from here (Kansas City) straight north to Canada, and another line branched off and went northwest to South Dakota and yet another went to Montana. The vision was very powerful and is burned in my head.

5-3-2012:
The voice of White Cloud (my spirit guide since 2001) came to me and said “your true name is Minehaha” I asked what it meant, and he said “Daughter of Chief Ha Ha.” I was then shown a vision of a very detailed scene where my father had recently passed, my mother was there and we discussed that I would need to take a husband who would be a strong Chief for the tribe. I had no brothers, so had more power than most women. I was also a seer and had the respect of the tribe. I went to a neighboring tribe, wearing men's clothing as a disguise for protection and with two men as well. I stopped outside of the village to change into a ceremonial dress and wore one feather in my hair . I was going to discuss taking one of the chief's sons as a husband so our tribes would be united and therefore, stronger. The chief passed a pipe, giving it to me as a guest of honor to light. This was very significant because I do not believe that women were normally doing this. He asked why I wore my father's feather in my hair (it was pointing down) since it is not traditional for women to do that. I explained that I would wear it until I found a husband worthy of it, then would give it to him. This was accepted by the group sitting around a small fire in a tepee.
White Cloud then told me that he has been with me for 11 years, and this is significant, because this is the 11th year and the 11th hour. I have been seeing 11:11 constantly since 2001.
-------------------
I looked up Minnehaha today and found there is a county of the same name in South Dakota (surprise since I am VERY drawn to this location and don't know why- I even went there last year and can't get it out of my mind that this is where I need to be now). Also that Minnehaha was a fictional character in Henry Wadsworth Longfellow's 1855 poem The Song of Hiawatha, which he penned after reviewing Henry Rowe Schoolcraft's publication on the traditions of the Ojibwe Indians of Minnesota. Ask.com says that Mineehaha really means “Waterfall or “Rapid water” in Dakota. Note that I have been hearing “Wate” a lot lately as well, which means water I believe.
As a child my first words were “HaHa.” My father said “maybe she was reincarnated and her past life was as an Indian.” From my crib I was fascinated looking at a rose in the wallpaper that was distorted in the corner and looked like a chief with a full headdress on. How I knew this I don't know. I was very small (I have memory going back to 3 months of age or earlier). I also heard drums in the distance that would get closer and closer, yet no one else in the family heard them. I thought they were war drums. I heard the drums until age 11, then they stopped.

El spoke to me one evening while I was meditating and said "Tell the people to move back to the homes of their ancestors." I saw a map with heavy black lines drawn to the north into Canada, into Montana, and South Dakota.
------------------------
5/28/2012 Journey to the Grandmothers
Judy White Wolf journeyed me to the grandmothers and I saw the cave and the grandmothers, and they told me that I was last incarnated as a Native American 900 years ago. They each gave me a white rock, which signfied 100 years each (total of 9). I then felt like I was going down somewhere. Next, I was coming back and I don't remember any messages. Judy says the messages will come to me when they are supposed to.
-------------------------

I am certain that these messages, while not yet fully translated, mean that there are some cataclysims coming soon that involve the Missouri and Mississippi rivers.  As you may know from my previous work, I have been getting messages and visions about the New Madrid fault for the past several years, and I believe that this recent communication is about that.  If an earthquake hit near St. Louis where these two rivers meet, it could be a huge disaster for people in that region.  So please be prepared for anything, and get food and supplies ready for several months.  This is just good sense anyway.
at June 08, 2012 No comments: